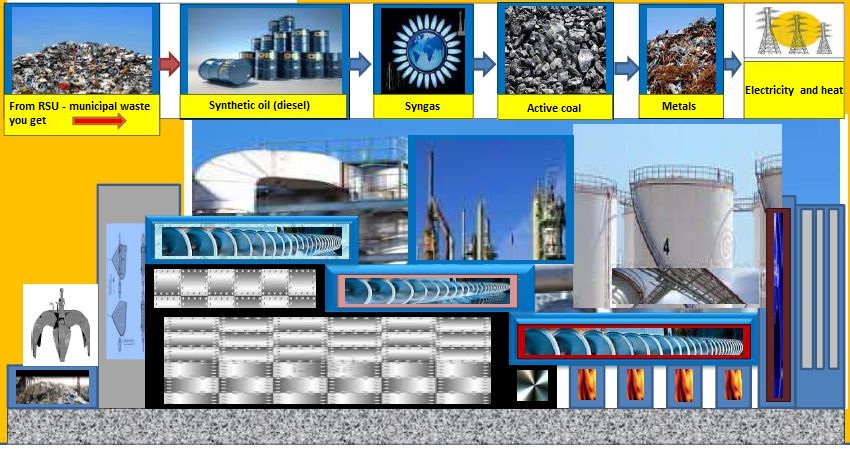 The PYROLYZER GASIFIER  (Note: we do not provide a detailed explanation of how the Pyro works because it is protected by an industrial secret. This is why certain features are not disclosed) The plant is an industrial invention owned and patented by Piromak Srl.  It is used for the disintegration of organic waste, such as biomass (wood, shrubs, vegetable fibre, organic sludge, olive pomace, grape seeds, plant residue from industrial processes, the dried layer of forest floor, dried animal manure, slaughterhouse waste, yarn, leather, Municipal Solid Waste (MSW), Refuse Derived Fuel (RDF), industrial waste, decontaminated earth, seaweed, bilge water, rubber, creosote-painted railway sleepers, tyres, various plastics (polyethylene terephthalate, polyethylene, etc.)

What is obtained by molecular disintegration:

Disintegration involves the splitting of the molecules that makes up the waste in a thermal field at a very high temperature, obtaining atomic fauna. Then, in the second phase, the reformation of molecules occurs that are different from the original molecules and a gas is obtained called Syngas (CH4 + CO + CO2 + H2 + C3H8 + C4H10) with a thermal power of 7-9,000 kcal/kg. Depending on the material loaded, a specific amount of synthetic oil (diesel) is also produced, as well as methyl alcohol (CH3.OH) and the entire chain of aromatic hydrocarbons. At the end of the process, a carbon particulate resembling wood charcoal is also obtained. Given the type of process, this becomes activated carbon, so it can be sold to obtain substantial revenue. If it is decided not to sell it or put it to use, it can be loaded in the DCS and used as fuel for the disintegration process.

The uniqueness of the abovementioned plant is that it can also be built in a small version that costs little and provides a rapid return on investment. Production is estimated at the maximum values​, ​because the range of products entering the market is extremely diverse. However, we aim to predict gas and oil production as close as possible to real results. (The power of the PYROLYZER GASIFIER is expressed in kg of the material to be processed.)

Note: The plant comprises machines and each system can be customised according to customer requirements

Maintenance and lifespan of Pyro: maintenance must be carried out periodically by removing crusting on the parts for the output of high-temperature total gas (350°C). Wear is predominantly in the augers for channelling the waste undergoing molecular disintegration. Replacement of the auger or the reconstruction of the worn part will not be necessary until after 3-4 years of continuous operation. The repair can be carried out directly in the workshop supplied with the system. Other maintenance work involves checking the oil level for lubrication of the speed reducers and all moving parts. The lifespan of the Pyro is determined by the smelting tubes, its most valuable component. If not subjected to unlisted thermal stress and if properly maintained, as indicated in the service manual, the smelting tubes can have a useful life of approximately 50 years.

Note: a request can be made for an extensive technical explanation from the engineer Domenico Tanfoglio  (CEO Piromak Srl) piromaksrl@gmail.com
Note: Piromak srl can draw up ordinary and extraordinary (full-service) maintenance contracts for as long as the customer wishes, providing on-site maintenance technicians who are always available, 24 hours a day, 365 days a year.